In the last post of this series on nullitis we look at how pervasive and distracting null-checking is. This new post focus on the object-oriented way of mitigating this problem.

But first, we should remember what is all the object orientation about. In simple terms, OO programs are just a network of state-encapsulating entities called objects sending messages around to perform computation.

We can visualize this with a sample financing application in which you have an object p1 representing an investment portfolio, when the line p1.estimateValue(currentIndexes) gets executed, a message tagged estimateValue with payload currentIndexes is sent to the p1 object. As a response, p1 can change its state, send more messages to the constituent investments and/or return computed values.

This simple scheme scale by allowing you to break the problem into objects that solve part of the problem and send messages (method invocations) to allow their fellows to solve the rest. A crucial point here is that messages decouple sender from receiver. In statically typed languages that means that any object implementing an interface1 can play the role of receiver and multiple implementations of the method could be called for different objects. For that reason, this is known as subtype polymorphism.

Contrary to the popular belief, OO is less about inheritance, factories and the singleton pattern than about polymorphism. Going back to the investment example, the p1 portfolio object is concerned just with adding up the estimates for every individual investment. Every investment object must accept the estimateValue message (i.e. implement the Investment interface) but can do it in a completely different way. For instance, some investments could be private bonds paying a periodic interest while others can be treasury bills following a completely different path. 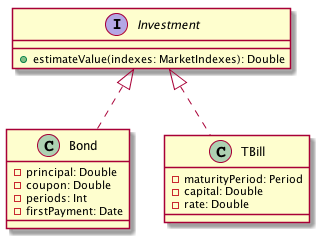 This has very far reaching ramifications that go from modest achievements, like enabling you to add more and more investment types without changing the portfolio code, to more important ones like allowing for dependency inversion, a general principle that states that details should depend on abstractions2.

With this simplified view of OO (Alan Kay, forgive me!) we can look again to the null-checking code. When a reference is nullable we need to guard its use with a check because null does not accept any message3. Why not represent missing values with objects able to accept those messages? Enter the null object pattern.

We can apply this idea by writing an implementation of Investment for the case of not investing at all. This no-investment, or NullInvestment, holds just the amount of available capital.

A NullInvestment instance could be returned as the best investment when nothing else is possible instead of null. Or it could be used as well as the initial value before the user selects an actual investment strategy instead of having a null. And so on!

If we think about it, the value of this pattern lies on removing all null-checks scattered all over the place to a new special-case class4. The rest of the code become simpler as it just contains the polymorphic call with no exceptions. This works very well for recursive structures (null/leaf nodes), objects aggregating components that might be missing, searches, process that could fail, event handlers, etc.

Another example could happen when some API provide a progress callback, typically providing an interface like ProgressListener. This makes very easy to plug an implementation that reports progress to the standard output.

If we want that a relatively complex process called FooProcess report progress when a listener is provided we can create a couple of constructors (with/without listener) and check for null whenever there is progress.

Alternatively, we can apply the null object pattern and write a NullProgressListener.

This will make null-check free the implementation of the process:

As you can see, this is a valuable pattern but it is far from being a silver bullet as there are several limitations to its applicability.

First of all, the null object must respond to the same messages than the regular ones and nothing guarantees that a reasonable implementation could be possible. A null event handler can do nothing, the null investment just provide no gains at no risk but what is the marriage state of a null employee? Apart from that, the implemented behavior can be coupled with the client code leading to non-obvious return values.

Other important limitation lies on the very fact of the null object behaving like the real thing. That could mask errors making very difficult to track them to their root cause.

Finally, the pattern will work better on behavior-encapsulating objects but not as well on value objects in which polymorphism and data encapsulation are on a second plane.