Today I feel like coining a new term. I should admit I love creating contrived neologisms, casually using them in front of friends and coworkers and see if they spread1.

The term I want to introduce is no less than a variation on test driven development. But first, let’s roughly sketch the standard TDD workflow just for the record:

The variation of TDD I want to baptize is practiced by people convinced of the value of unit tests, of high coverage and even of the less popular practice of interleaving test and production code. However, this fellows don’t take seriously the test-first practice so this is their workflow:

With this setup you get part of the benefits of the standard TDD but with some problems that can be painful and let people think that the original practice is broken2.

When you write production code first, you might be written the wrong assertion. You might make a mistake and “test” something that is always true regardless of whether you add the right behavior. Even worse, you could be asserting just the opposite of what you desire and you would not notice as you are not expected to see the tests failing at any point.

You will also have less comfortable APIs, as you designed while focusing in the implementation, not on the user code. Test-first design is also a powerful force toward more decoupled designs and you won’t feel that love, neither. In fact, by the time you will write the test cases, you will be tempted not to test the most contrived cases.

In this line of thought about design, but more subject to personal opinion, I think that when design is done in huge leaps instead of tiny steps the result tends to the over-engineering. Trying just to pass one test at a time is a constant remainder of the YAGNI principle.

How we should call this “disordered” TDD? Green-green-hope-for-the-best is too long so I’ve decided to mirror the letters and use DDT because: 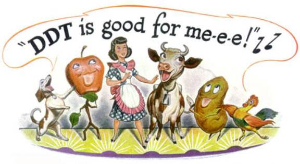