Following the tradition started by Dijkstra in the sixties, I want to warn you all: Java’s String.split should be considered harmful. But first, some context.

As Ben Moseley and Peter Marks explain in Out of the Tar Pit there are two main techniques used to understand a piece of software: informal reasoning and testing. They bet on the former as being the most important (emphasis in the original):

Of the two informal reasoning is the most important by far. This is because –as we shall see below– there are inherent limits to what can be achieved by testing, and because informal reasoning (by virtue of being an inherent part of the development process) is always used.

Even testing is, in some sense, guided by informal reasoning. For this reason, we should be very wary of how designs aid or hamper our reasoning about the code. String.split is an unfortunate example of the latter and I frequently see related bugs when doing code reviews.

Apart from stark simplicity (less stuff, less intertwined components) one thing that fosters our ability to reason is relying on properties that the different designs have. These can be things like knowing that the returned value is never empty, there is symmetry if we switch the arguments order, there is independence between calls, data structures are immutable and we not worry about other parts of the program changing them, some invariant holds, etc.

Let’s imagine that we need a function to split some input string in words discarding the white space. If we don’t believe in testing (this function is so simple, what can go wrong?) this is what we are going to write and ship to production:

However, this implementation is wrong because String.split does not behave like we expect.

Number one mistake in TDD: Underestimating how effective trivial tests can be in catching bugs.

A classical move when doing TDD is starting with the degenerate case and then more complicated ones.

Through testing we have learned about the exceptional behavior of String.split for the empty input so we improve our function.

But, are we done yet? We could examine the implementation of String.split but the code is a little bit convoluted so we might be overlooking something. How can we gain confidence?

Property-based testing can be a useful tool in situations like this. We can directly specify the property we want to rely on and let the test environment to generate random inputs to test it. In this case, the property we were expecting to hold expressed in plain English was:

We can easily define a couple of scalacheck generators for the text and the white space:

And then the property itself:

Immediately, scalacheck finds a counterexample for our test.

Looks like prefixed white space creates an initial empty string out of the blue. Next iteration:

Aaaarrg! Let’s change our strategy to just filtering empty strings in the output.

This time the tests pass (no counterexample found) and we have more confidence on our code supporting the property we initially were assuming. We have learned how pernicious String.split is. Avoid it and be very suspicious of any code review in which it shows up. 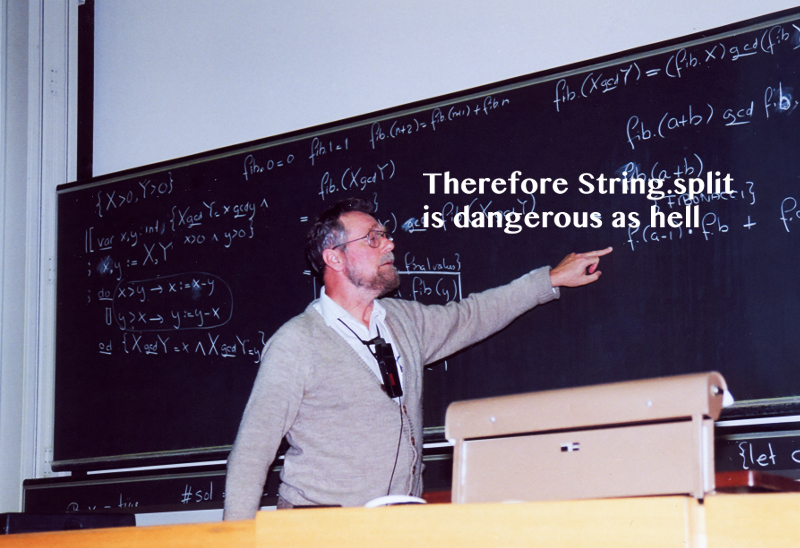 But we have learned something way more valuable through this (contrived) example: property based testing is a bridge between informal reasoning understanding and testing-based understanding. We enhance our reasoning thanks to a property that is “verified” through testing.

Note the quotes in “verified”. We cannot exhaustively check all inputs in the general case so we are highly confident but not this-is-proven confident. This is nice for properties that escape static analysis but we are better off when we can rely on the compiler or linter.

If only there were a way for a computer to check that objects have the expected type ... https://t.co/aCYz9Z3M0Q