A way out of the Jar Hell

A couple of weeks ago, a friend retweeted the release announcement of Debian 10:

Debian 10 buster has been released! https://t.co/Qm1Oc7SXiF

First thought: it has taken a couple of years but here it is.

Second thought: these people know how to curate software… wait, my spider-sense is tingling crazy.

And then I realized the connection between how the Debian project solves certain projects around software ecosystem curation and some of the least happy parts of the life of the Scala developer: the trouble with libraries, mainly binary compatibility problems.

It can be argued that the single factor that makes modern development–with Scala or otherwise–more productive is the extensive use of tons and tons of open source libraries. What in other times would have required months of development is today a handful of lines of code depending on tens of libraries1.

However, this powerful practice carries the seeds of important problems that can curtail its benefits. Out of the many possible perils of the profuse use of libraries, most of them are given short shrift by the development team as if they were not our responsibility. Take a look at the skeletons in our closet:

All these problems get amplified by the fact that when we decide to marry one library we are not marring just that library but all its family: potentially many transitive dependencies. You need to check the licenses of all those libs, evaluate their quality, monitor its CVE’s and pray for them not to have a version conflict with the other libraries you are using. 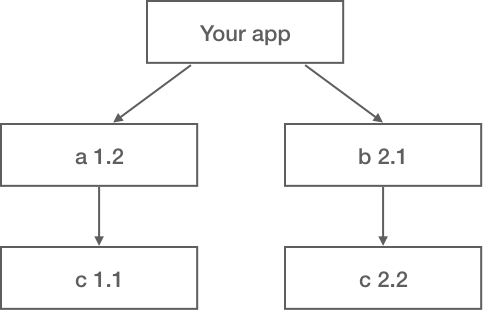 When we run our program, we cannot have two versions of the same library (unless using OSGi) and version 1.1 of c is evicted in favor of the other one. 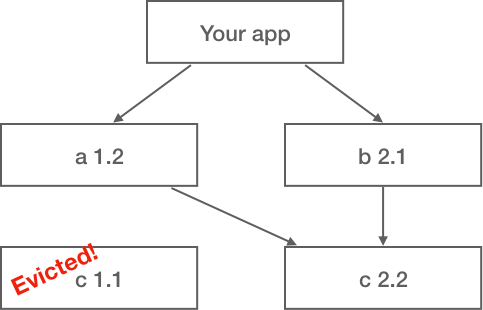 When a dependency eviction is a problem? When the assumptions made by the code depending on the evicted library are not met by the one used in runtime. There are two types of problems:

In an ideal world, we will have libraries with semantic versioning, which is a convention directed towards making our lives as consumers of libraries easier:

If all libraries were following this versioning system it would be easier to manage evictions as you’ll be sure that c 1.2 could be safely replaced by c 1.9. However, it’s difficult that this ever happens because you can check binary compatibility in an automated fashion3 but semantic compatibility is more elusive.

Another practice that helps mitigate this problem is to reduce the number of dependencies by:

Another solution consists of actually allowing two versions of a library in runtime. That is possible in the JVM because class management is delegated to class loaders. OSGi is a framework that leverages this to allow multiple versions of a library with some caveats. With OSGi, you need to annotate which packages of the library are public, being the rest private and not accessible (this plays very bad with reflection-based frameworks). As long as a library don’t expose any type of its dependencies in its public part that dependency can be hidden from other modules and you can have multiple versions of it.

Is then OSGi a solution? It is for most cases but you are paying for it with more complexity in dependency management, will have problems with anything relying on reflection and for some cases, you will need to still fork some libraries.

Another possible mitigation that doesn’t solve this problem but can greatly reduce its impact is the use of microservice architectures. In such architectures, each service has a narrow business purpose and that corresponds to a subset of the dependencies that the equivalent monolith whould have had. However, this is not automatically true as some microservice ecosystems tend to share many, many shared libraries and you get the worst of both worlds: lots of dependency conflicts and coupling like in the monolith case and you need to cope with distributed systems complexities as in any microservice ecosystem. This anti-pattern is known as the distributed monolith.

Is there any way out of the JAR Hell?

Lately, I’ve been wasting quite some time impeded by binary compatibility problems and I became close to convinced that they were an inevitable part of the life of the Scala programmer very much like NPEs for the Java programmer. Is there any solution? Should we suffer these problems as a way to atone our promiscuous library sins? 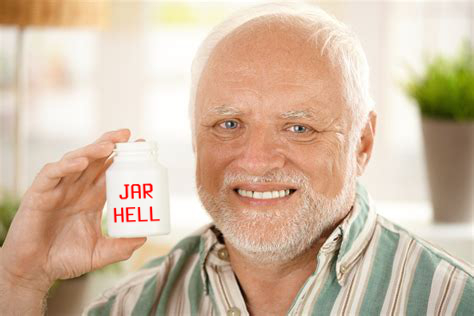 Should we act like the JAR Hell is inevitable?

A workable approach to these problems was hidden in plain sight! When I saw the Debian 10 release announcement I was thunderstruck by the revelation: Debian has been solving these problems for decades!

If you think about it, a Debian release is a set of packages (libraries) that comply with some license requirements5 and work well together. Those packages are curated by a bunch of maintainers that form a community and you need to be verified in person to get into (so it’s unlikely that something like the NPM problem happens to them).

A release of Debian is created by getting fresh versions of the core packages (kernel, libc, buildtools) and then, aligning everything else. They have tooling that makes very easy to manage patches on top of the original code (“upstream” in Debian parlance). Those patches are used to fix compatibility problems, make default behavior more Debian-like or fix other problems.

After the release is out, packages are frozen except for security patches. These are, by design, things you can trust to update automatically with confidence that nothing is going to break. Interfaces won’t change, configuration formats won’t change. You just get security patches. These are sometimes provided by the upstream developers and, other times by the Debian maintainers.

What happens if I need the latest version of a library for a release of Debian that has an older version? You can always compile it against what is shipped in that release. However, as this is very common, the work of changing dependencies and fixing compilation is shared in dedicated “backport” repositories.

Cool. Can I have this for Java/Scala? We have examples of limited versions of this. For instance, the Sprint Boot community does this kind of curation for Spring-based applications. They have dozens of “starter” modules that are a selection of concrete libraries in versions that work well with each other. For instance, mix in spring-boot-starter-data-couchbase and spring-boot-starter-data-cassandra and you won’t have compatibility problems. However, it is useful only with the premise of building a Spring application and limited in scope.

A promising tool that is in development for the Scala ecosystem is Jon Pretty’s Fury, a replacement for SBT. An integral concept on Fury is the layer, “a collection of related projects you are working on” and each project can reference the upstream repository of an external library or an internal artifact. Layers can be potentially shared to form the basis for a curation similar to what the Debian project does.

Getting out of the JAR hell is a matter of maturity. Using so many libraries so liberally has multiplied developer productivity to a large extent but without the restraint of some curation culture like the one in Debian, its risks and practical problems might cancel out the advantages of having access to this galore of functionality.

Updated on 2019-08-17: mention microservices as a mitigation inspired by trylks’s comment